Business Culture and Communication in France

On Tuesday 8 February 2022 the Netherlands Business Council France organises a webinar commissioned by the Embassy of the Kingdom of the Netherlands: Business Culture & Communication in France. 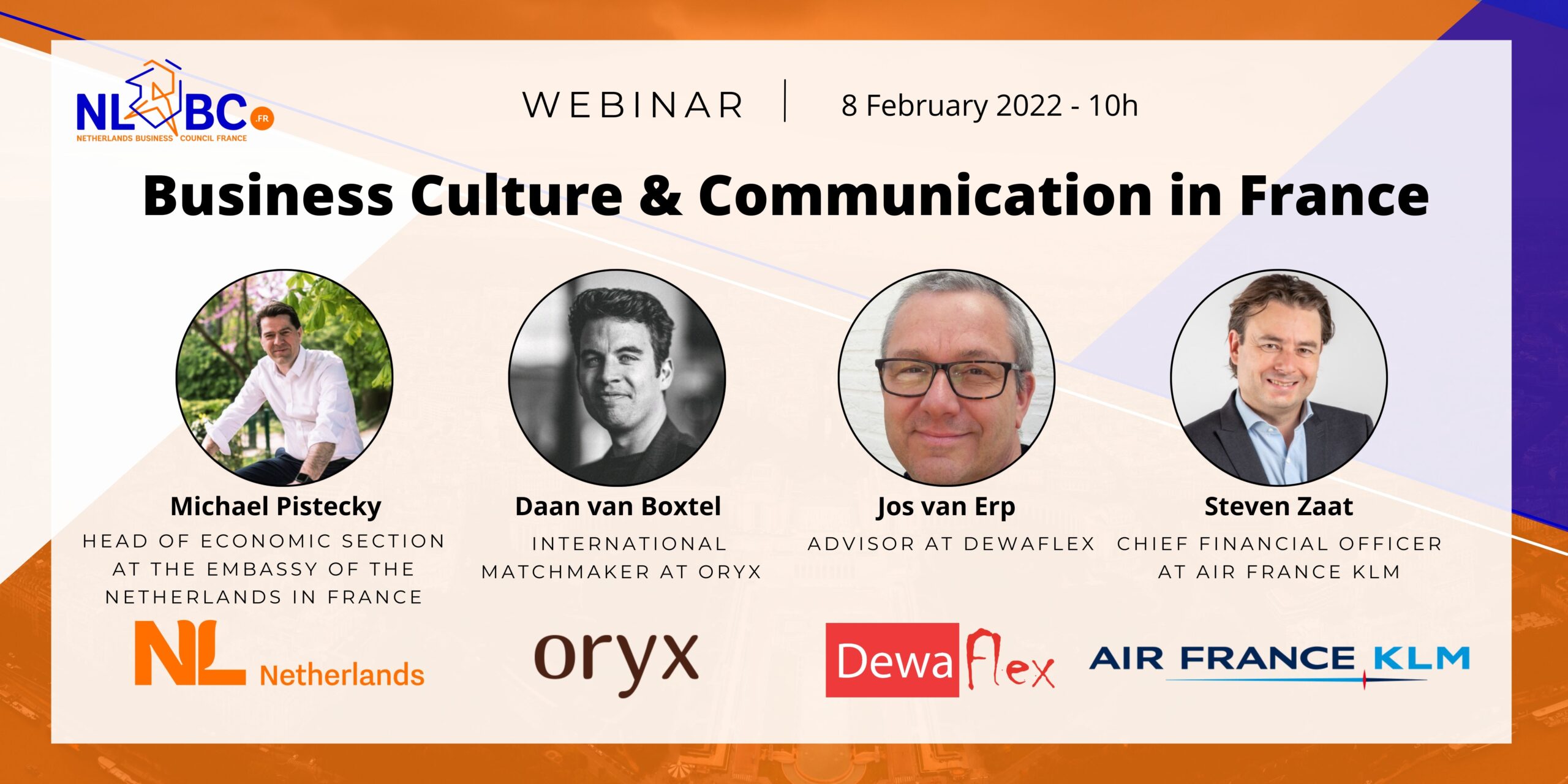 Participation & Costs
The webinar is free to attend and will be held in the English language.

Questions
Do you have questions about business culture or communication? Please send an email to info@nlbc.fr

Q: @Daan van Boxtel, would you say there is a shift towards a better mastering of English nowadays, meaning that speaking French is not really a prerequisite for operating in France anymore?
A: “Based on my experience. What I do see is that people from my generation (34) are starting to master English better and better. And they also tend to go abroad more so a lot of candidates that I meet lived in the UK etc.. Just to have this international mindset”.  “They break out they French bubble in a way” – “So I think that is changing although some stay with their french actors that they look on Netflix; it is changing”. In the field, starting with a french native is an advantage.

Q: @Daan van Boxtel, everyone tends to focus on the differences, but what is the common ground between our countries and (business) cultures?
A: Boek “The Culture Map”: dit is echt een aanrader. Heel interessant. Je vindt daar ook zaken die overlappen uiteraard tussen beide culturen.

Q: @Steven Zaat, personal contact is more important in France. In what way do you think the French developed their relations during the Covid.
A: “Face to face contact is always better, its more intense, especially when you have meetings, you at least see the reaction”. French in Paris area they love to work from home.  However some meetings are still better on a face-to-face structure. Video make it sometimes really difficult.

Q: @Jos van Erp, “In the Netherlands, personal contact is not anymore essential for the development of a relation and a video conference for that is sufficient” What do you think about that?
A: The best way to do business is face to face, but over the last 2 years, the Netherlands just like France have faced the challenges of corona. Video conferences have been accepted just a bit faster in the Netherlands. Even if there was a first contact before, this is not a big obstacle to start building a relationship. “You can make a start with it”

Q: @Maarten de Bruijn, you have lived in France for several years, do you agree that the mastering of English by the French population is on its way?
A: “I would absolutely agree, I see a lot of people more speaking English. In French schools you see earlier coming in, Yes it’s maybe on a different level but the key element in this is actually Willingness.” Recent studies showed that French are much more open to shop abroad in Europe, this in an example of inherence openness to other cultures. The language barrier is not that important anymore as it was 20 years ago.

Q: @Michael Pistecky, do you agree that the mastering of English by the French population is on its way?
A: On a government level and also regional level, “what I see is exactly that openness to be interested in solutions abroad and to work together.” “I think also that you should use that and invite your french partners to the Netherlands and show them around and also show something from your culture”.